"....Dance is a creative play as well as an ethos, a personal gain for the whole self; it is important for the emotional, psychological, spiritual, cognitive and social development. Children learn to work at their thoughts and feelings, to communicate with others...
...They need challenges matching their increasing skills and skills to match the increasing challenges they face,
Dance is a basic survival tool which will help them stand strong and enable them to make choices and decisions, will help them in their search for the sense of life...
...It is a means to be heard; it promotes fairness, acceptance of difference, both basic for a healthy society..."
Posted by Gruber at 22:00 No comments: 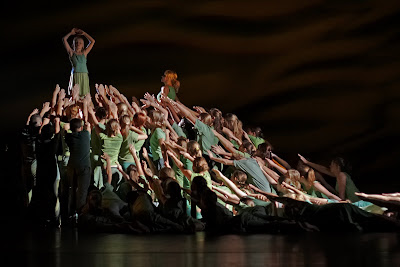 After dinner at the guesthouse, we meet again for the more theoretic part: Maldoom´s conception of his work, DVD samples of his projects, questions and answers about the essence of his philosophy and pedagogy:

"....Since my projects mostly include children from different backgrounds, there is a tendency to think that what I am doing is social work. It isn´t. There are some social side effects to dance. But the only thing that counts for me is: ART...

...Whenever I enter a room for a new project, I immediately consider the children as potential artists.I have an unshakable belief in their extraordinary potential.There is no such thing as "I cannot dance". In my whole career I have NEVER met anybody who could NOT dance......I like working with "unperfect bodies"......

...There is a tendency to put people into categories. The aim of my project is to abolish those categories. In dance, you do not know who is who. Everybody speaks the same language: dance is a language in touch with yourself, with others and with the environment...

The children´s problem is the view they have of themselves (being failures). Their value of themselves, of art and culture is limited by the attitude of adults towards them. Children need respect...

...The moment you enter the room they will know if they can trust you..."
Posted by Gruber at 08:00 No comments: 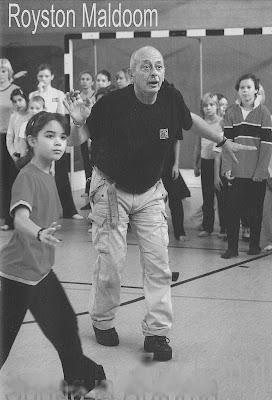 "FOCUS" !
And since the kids are most likely not to understand what is meant with it at the very first rehearsal, Royston has more than one trick at hand to help them do so, and WE, the kids of today´s class, are soon given to understand it quite clearly:

He then gives us some tricks how to ensure discipline and concentration:

"keep chums apart, assign them to a place which will remain theirs throughout the project. Go to the last row, where the restless ones tend to hide, then ask everybody to turn around so that the back row becomes the front one and start rehearsing from there."
Posted by Gruber at 23:30 No comments: 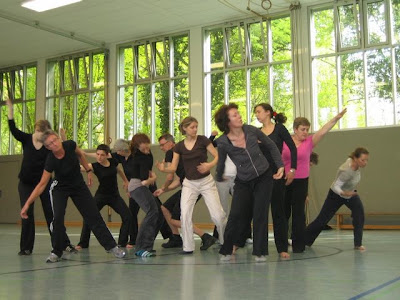 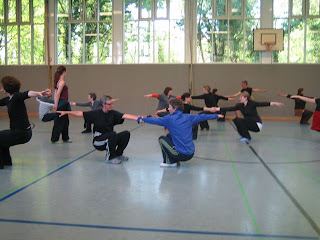 Kids, the floor is yours!

2009 will bring about the fourteenth edition of the George Enescu Festival, an international music festival which takes place in Bucharest every second year and has acquired an excellent reputation beyond the country´s borders.This time, the program will include a performance of a new kind: romanian youngsters will stand in the stage lights and reveal some unsuspected talents.

ROYSTON MALDOOM AND JOSEF EDER, two renowned choreographers from England and Germany, are coming to Bucharest to realize a dance project with some hundred Romanian teenagers from different backgrounds, schools and institutions.

After five weeks of intensive rehearsals, five days a week, five hours a day, some one hundred youngsters, aged between 11 and 22 years, who for the most part have not danced before and have no experience whatsoever with classical music, will be ready to stand on the stage and perform Strawinsky´s Firebird  professionally. Shouldn´t it be so, it would be the first time in 30 years that Maldoom does not get out of "his" kids what he expects from them -and what  he knows they CAN, if they want to!
And whoever has seen him working with young people knows that it DOES work and WHY it does.

On the night of the performance, the kids will doubtless feel rewarded for their efforts by their audience. But far from meaning the end of the project, that night will, so we hope, mean a new start for many of them: the experience acquired in the process of elaborating the piece will hopefully have given them a new vision of themselves and help them stand firmer on their feet in the future; the  self confidence they will have gained will encourage them to look for new challenges and enable them to face these challenges.
Posted by Gruber at 13:30 No comments:

The  charitable association "Jungen Rumänen eine Chance!" (Give young Romanians a chance!) goes back to that first visit at Concordia shortly before Christmas 2003 and  will (once it is definitely registered as such, that is, hopefully next week!) owe  its creation to every single child belonging to the "Sfintul Ignatiu family", one of Concordia homes. The warm atmosphere created by the educators impressed me each  time I visited Sfintul Ignatiu and all these smiling little faces  regularly attracted me like a magnet all along  my three year stay in Romania.

Our common activities reached from drawing classes, visits to museums, theater, concerts or the opera, treasure hunts through Bucharest, jogging or picknicks in the park, swimming or cooking together.

The enthusiasm of these children, of Romanians in general and in particular of a few Romanians  who became close friends,  were the motors of our activities. Indeed, not only some foreign friends, but also quite a number of Romanians  joined me spontaneously  and offered their skills and  free time to this cause -a particularly precious gift  considering how hard life  in Bucharest is:  some of them offered free psychological support, homework tutoring, story reading, theater playing or choir singing, or even their vacation time to join us for a summer camp!

Pre-history of the project

It all started on Dec. 22nd 2003.
In the early evening we -my husband and I- arrive at Sfintul Lazar, the first and main house of Concordia, where Ruth Zenkert, Director of Concordia and Pater Georg Sporschill,  founder of this humanitarian organisation in the nineties have invited us to join their community for their evening prayer.
It is about 6.30 pm. The time when all the kids have to be back  (provided they want to get a meal and spend the night here) from wherever they spent their day: at work, school, or for the majority here in the main house, simply on the street, which for many of them still means more of a home than even Sfintul Lazar, where they get food, lodging, warmth and protection,  basic elements of any "normal childlife".
In a long, overfilled hall we are welcomed by about a hundred kids, clustered around some thick candles arranged on firtree branches  on the floor and  waiting in twilight and  silence for prayers to begin. Their age ranges from four to adult age. The smaller ones are sitting on the laps of the older ones.
All through the prayers - bible reading and songs followed by a personal prayer by each child, there is a stunning atmosphere of recollection, peace, love and unity floating in the air. We are soon to hear that this is the only moment of the day which gives Ruth strength and courage to go on doing what she has been doing for the last 15 years: fighting day and night,  seven days a week to cope with the problems of their some 500 children scattered over two dozens of homes in and around Bucharest, trying to give them back their stolen childhood.
After prayers, we are brought into another room where the children  from Sfintul Ignatiu´s house -a dozen altogether- sing for us with Mihaela, their 24 years young "mother", the most beautiful Christmas songs (in Romanian: Colinde ) we have ever heard. Within minutes they conquer our heart and I know already: I will have to see them again...
Posted by Gruber at 19:00 No comments:

About the founder of the association

Monique Gruber has dedicated her life to working with underprivileged and handicapped children in Central and Southeastern Europe. Confronted by social problems in post-Communist countries while serving alongside her husband, a former German ambassador to Yugoslavia, Hungary and Romania, she initiated social and educational projects with the aim of giving these children a better chance in life. Her background is in philology, which she read at the Sorbonne. She has worked as a translator and taught French and English at high school through university levels in France, the U.K. and U.S.

2004-2008 Concordia Organization for Children in Need Bucharest, Romania
Worked intensively with a group of 15 of Concordia´s 400 former street children, including founding and organizing a choir, „Sursum Corda", which performed at various public and social functions; a theatre group which participated in Sibiu’s International Theatre Festival in 2006 and 2007; a summer camp and cultural and sports activities (inter alia: drawing, swimming, cooking, museum and concert outings).

2005 Choir at the Tirgsor Women´s Penitentiary Bucharest, Romania
Established a choir at the penitentiary with the aim of fostering detainees´ reintegration into society. Performances include a joint concert with the Diplomatic choir in Biserica Luterana, Bucharest.
In the meantime, the choir regularly performs in churchs and institutions of the region under the conduct of Mihai Nae, an amazing pedagogue and devoted conductor. In May 2011, the association "Jungen Rumänen eine Chance!" acquired a set of chimes for the choir which was handed over to them by Monique Gruber who also attended the first repetition. A very moving experience....The girls are now learning to read music and are presently giving Christmas concerts in near by communities with the chimes.

2000-2003 Hungarian Institute for the Blind Budapest, Hungary
Organized music events with blind youth in cooperation with an amateur chamber orchestra.

May 2006 "Current Developments in the Care and Education of Persons with Autistic Spectrum Disorder" Conference
Bucharest, Romania
Initiated and organized an international conference together U.K. charity, „Children in distress”, to raise public awareness, establish networks among professionals for exchange and support via workshops, training and lectures (follow-up conferences held in 2007 and 2008) for 300 participants including doctors, public health officials, therapists and families.

Mar. 1999 "Women and Violence in War" Belgrade, Serbia
Organized a symposium on the occasion of Women´s Day with 250 women from the Serbian civil society and speakers from all republics of former Yugoslavia.

June 1998 International cuisine event and lottery Belgrade, Serbia
Raised 15.000 DM to purchase a bus for providing daily transportation from villages around Belgrade to day care centre for children with autism.
Posted by Gruber at 09:30 4 comments:

"Jungen Rumänen eine Chance!" is a charitable association aiming at promoting the integration of Romanian adolescents into society through the realization of joint cultural projects with other Romanian youngsters.

The 2009 edition of the George Enescu Festival in Bucharest presented a performance of Igor Stravinsky´s Firebird by one hundred youngsters, following an intensive training under the lead of Royston Maldoom and Josef Eder, two renowned choreographers specialized in community dance. It was a stunning performance. Ten minutes of applause were the well deserved reward for six weeks of arduous rehearsals.

..and help shaping the future of one hundred youngsters by supporting this promising
project.
All you need to do is send your contribution to:
Account name: "Jungen Rumänen eine Chance!"
Account Nr: 2381435
Badische Beamten Bank
(BLZ 66090800)
IBAN: DE57 6609 0800 0002 3814 35
BIC: GENODE61 BBB
The association is recognized by the Finanzamt Überlingen as a charitable corporation. Accordingly, your contribution can be deducted from your taxable income. For a donation receipt send a mail to: wm.gruber@gmail.com.
If you do not object, your name will appear on our list of friends and supporters of the association.

My Favourite blogs and websites

About the association´s founder

Monique Gruber has dedicated her life to working with underprivileged and handicapped children in Central and Southeastern Europe. Confronted by social problems in post-Communist countries while serving alongside her husband, a former German ambassador to Yugoslavia, Hungary and Romania, she initiated social and educational projects with the aim of giving these children a better chance in life.