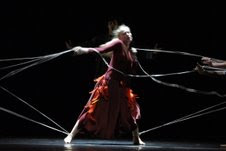 Just one more day and the Firebird project starts! Tomorrow Ada will travel to Sibiu and Brasov with Tedy and his team to fetch our young participants and bring them to Bucharest.

On Monday, August 3rd, the first day of rehearsals, at 9 AM, we will all be gathered at Caragiale High-School: over 100 young artists among which three Germans, Monique Gruber, president of JRC, Josef Eder, artistic director of the project, Romanian choreographer Irina Roncea and Columbian choreographer Martha Hincapié, Romanian assistant Oana Rotariu, film maker Tedy Necula and his team in charge of the documentary dedicated to the project, German and Romanian volunteers, and last not least, Alexandra Arnautu, Ada Lungu and Mircea Tache from If Magic, coordinators of the project, who have been working day and night with Monique in the last few days to ensure logistics and organisation.

Volunteers and participants from Sibiu and Brasov will be accomodated at "Neghinita” Care and Hosting Centre, a tidy and centrally located home kindly offered by the City Hall of Sector 2. For 4 weeks, the gymnasium generously put at our disposition by the National College I.L.Caragiale will be the birth place of a new Firebird, the place where creative energies will be unchained. There will be dancing, hopping, sweating and laughing….

Just as thrilled as a team competing in the world domino championship right before the first domino falls, praying that it will trigger the hoped for chain reaction, we are engaging in the community dance adventure. Our first destinations will be the stages of the National Theatre in Bucharest and Sala Transilvania in Sibiu, but the journey will hopefully take us much further in the next few years.

If it is true that the Firebird is everything but a competition between the youngsters, it is a competition of each participant with himself, against the boundaries of his mind, against his own doubts reflected in his peers´eyes. 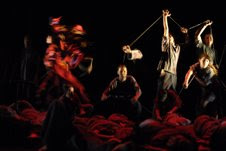 Community Dance is a competition with neither winners nor loosers. Everybody wins: Only five weeks from now, 100 new born artists will stand on the National Theatre stage and dance on Stravinski’s music. They will have traded a holiday of fun and leisure for a month of hard work, an unexpected choice for their age to say the least, but each and everyone of them will be awarded the most precious prize of all: the belief that he can fulfill his dreams, against all odds and no matter how wild they are, but that it is up to him to fulfill them.

The website www.pasareadefoc.ro will witness the evolution of these one hundred yougsters and monitor every step of theirs on this arduous trail. In time, the site will turn into a virtual home for all community dance fans willing to indulge themselves and join others in this enriching experience.
A popular French saying has it that “It is only the first step that matters.”

So, let´s step up and start dancing our way through this fabulous journey along with the Firebird.
Posted by Gruber at 09:11 No comments: 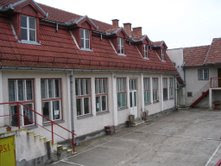 Alexandra and I were in Sibiu and Brasov for the last two days to meet Mr Johannis -the Saxon Mayor of Sibiu- Mr Bottesch, the Saxon President of the regional council, and other personalities involved in the realization of the project. We also met the participating children and their parents and checked all details concerning transportation, lodging and the performance place, a very nice gym with 1000 seats whose director, Mr Victor Cornea gives us all possible help to meet the demands of our 120-man-performance.
The Authorities are extremely helpful and put a nice countryside summer camp at our disposition for our three night stay in Sibiu
near a natural salt lake where the kids will be able to refresh themselves between the rehearsals.
Posted by Gruber at 13:00 No comments:

Questions we have been asked lately

Question Nr 1: What is "Community Dance"?

This would actually be a question for Royston and Josef to answer, but until we get them to give their own definition on this blog in a free minute (?!) during the project, here is an attempt to define it on the basis of some Maldoom projects and a workshop I attended in the last few months.

As its name indicates it, Community Dance targets not just part of a community, but all its members, regardless of gender or age, of ehtnic origin or social class, of physical condition or mental health.

Its magic lies in group dynamics and their positive effects on the participants: rousing unsuspected potentials, creativity and endurance.

In Community Dance projects, it is not so much the result that counts as the process itself. It is all about challenge, about experiencing discipline -and making it to self-discipline-, acceptance of "otherness" -tolerance-, about discovering one´s own skills and surpassing one´s limits, witnessing the gradual increase of confidence in others and oneself; and last not least, sharing with the group the laurels of hard rehearsal weeks.

By the way, I just tipped "Community dance" on google to check whether there is a definition of it and guess whose definition I fell upon? Royston´s (in German though).
Posted by Gruber at 21:43 1 comment:

In the meantime, I´ve got a small mathematical exercise for you to solve:

120 kids are participating in the Firebird project.
The project will last 41 days.
Up to now, we have managed to get sponsoring for 30 Kg of chicken from a poultry farmer (whose name has not been revealed to me yet).
One chicken weighs about one kilo.
Considering that you have to deduct the bones of each chicken - that is, say 180 gr.
How much meat will each kid get during the entire project if we do not find some more generous sponsors or meat producers?

Send us the solution without delay, or better still, a pork, an ox or a turkey......
By the way, the first one who solves the problem both ways gets a prize!
Posted by Gruber at 13:23 1 comment:

Although a site on the Firebird project was created a few weeks ago, it is only from today onwards that you can find detailed information on it. At first, in Romanian, but from tomorrow on there will be an English version as well. www.pasareadefoc.ro
Beside general information, you will find on this site all the press articles on the project from its beginning.

Throughout the project´s implementation, both our website and blog will keep you informed on the project´s sponsors and supporters; its progression will be documented with details and pictures of the rehearsals and some of our young "artists" will write about their impressions and their daily life on the campus.

So don´t forget to check both sites every now and then!
Posted by Gruber at 11:24 2 comments:

"Jungen Rumänen eine Chance!" is a charitable association aiming at promoting the integration of Romanian adolescents into society through the realization of joint cultural projects with other Romanian youngsters.

The 2009 edition of the George Enescu Festival in Bucharest presented a performance of Igor Stravinsky´s Firebird by one hundred youngsters, following an intensive training under the lead of Royston Maldoom and Josef Eder, two renowned choreographers specialized in community dance. It was a stunning performance. Ten minutes of applause were the well deserved reward for six weeks of arduous rehearsals.

..and help shaping the future of one hundred youngsters by supporting this promising
project.
All you need to do is send your contribution to:
Account name: "Jungen Rumänen eine Chance!"
Account Nr: 2381435
Badische Beamten Bank
(BLZ 66090800)
IBAN: DE57 6609 0800 0002 3814 35
BIC: GENODE61 BBB
The association is recognized by the Finanzamt Überlingen as a charitable corporation. Accordingly, your contribution can be deducted from your taxable income. For a donation receipt send a mail to: wm.gruber@gmail.com.
If you do not object, your name will appear on our list of friends and supporters of the association.

My Favourite blogs and websites

About the association´s founder

Monique Gruber has dedicated her life to working with underprivileged and handicapped children in Central and Southeastern Europe. Confronted by social problems in post-Communist countries while serving alongside her husband, a former German ambassador to Yugoslavia, Hungary and Romania, she initiated social and educational projects with the aim of giving these children a better chance in life.